It Is Time: We Must Tackle Term Limits

Over 8 in 10 Americans support term limits.

More than 8 in every 10 Americans supports the idea of instituting term limits on members of Congress. It’s obvious even to the average citizen the impact that career politicians are having on our country. Instead of the citizen legislators envisioned by our nation’s founders that would serve a few terms and then return to civilian life, politicians today become entrenched Washington insiders that have to constantly concern themselves with the business of fundraising and getting re-elected rather than of legislating.

The Congressional Research Service studied the average length of service among members of Congress and they’ve proven that what we intuitively knew was happening really is happening. Members of Congress are sticking around for longer and longer periods of time and the nation can feel its impact. 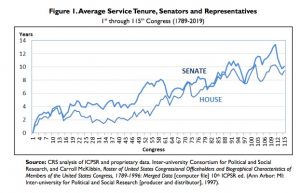 So what can be done about this? Rep. Francis Rooney, a Republican from Florida, has crafted a unique solution. In April 2018, he introduced the Thomas Jefferson Public Service Act of 2018 (H.R. 5539), which would reduce the salary of any member of Congress who had served six consecutive terms in the House or two consecutive terms in the Senate to $1. In addition, it would end that member’s creditable service towards retirement benefits. The idea raises interesting constitutional questions. While Article I, Section 6 of the Constitution requires Congress to determine its own pay (and different members do receive different salaries – for example, congressional leadership earns more), it’s unclear whether this would be upheld by the Supreme Court in light of the Thornton case.

Former Congressman Pete Hoekstra, a Republican from Michigan, also proposed a novel idea. While nonbinding, Rep. Hoekstra suggested requiring a national referendum on the issue that would put the question of term limits on every state ballot in the nation. The results wouldn’t have the force of law, but they would make it clear to lawmakers where the voters stand, and it would draw national attention to an issue that, while garnering broad bipartisan support, is largely ignored by lawmakers.

Every politician acknowledges that Washington is broken. But it can’t be fixed by those that continue to buttress the broken system. Real change will only come if we change the way the system works and those that operate within it.

Which U.S. President Had the Best Work Ethic? Here’s Our Top Five.

The Lesson of Cincinnatus and George Washington